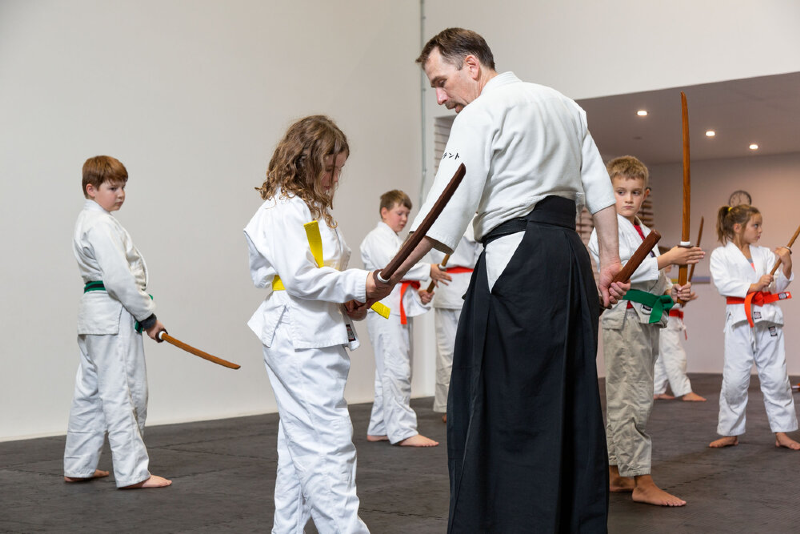 There are many different types of martial arts. Boxing, capoeira, jujitsu, karate – the list goes on. If fighting is involved somehow, even if it’s ritualised to some extent, then it’s a martial art. As you can no doubt tell, each one emphasizes different techniques, so no two disciplines are exactly the same, even if they have similar movements. Aikido in itself stands apart from most other traditional East Asian martial arts, with its focus on taking another person’s attack and redirecting it in a nonviolent, peaceful way.

All that said, would different aikido practices change or diverge from the root discipline when weapons are involved? That is, how does aikido differ when a bokken enters the picture?

Difference Between Aikido and Kendo

Before we look at how regular aikido and bokken aikido are different, let’s take a look at aikido and kendo. Both are derived from traditional Japanese sword-based arts. These disciplines have the suffix –do, which translates to “way”, compared to other martial arts with the suffix –jutsu, or “method. This infers that the emphasis of both aikido and kendo is on the practitioner’s character, rather than their knowledge of combat techniques and strategies. Both can also make use of a bokken or wooden sword in practice, but that’s where they start to differ.

Kendo is a sport, with public tournaments and competitions and associated awards. Aikido, on the other hand, isn’t competitive at all. When practised, it is for self-improvement and practical self-defence. Another difference between the two is the use of armour, which shows up in kendo but not in aikido. Finally, kendo practitioners learn how to parry their opponent’s strikes and land their own in order to score, aikido practitioners learn how to use the bokken to redirect an aggressor’s attack with as little violence as possible in order to quickly end the fight.

Difference Between Regular and Bokken Aikido

The most obvious difference is that regular aikido has students practice barehanded, while bokken aikido has them armed with said weapons. Both sub-disciplines involve learning how to disperse, redirect, or neutralise attacks, and in the case of the former, practitioners eventually learn how to take an opponent’s weapons away from them.

The latter, however, is more dangerous than the former even though aikido, in general, is a defensive art, and therefore means the practitioners have to be more careful. That’s because bokken can cause injuries similar to those caused by clubs and other battering weapons. Said injuries range from bruises to fractures, and even ruptured organs – risks that aren’t associated with regular aikido.

As you can see, the bokken may be blunt, but without the proper training and supervision that aikido provides, it can still be a dangerous weapon in someone’s hands. So if you want to learn how to handle it properly without injuring yourself and a would-be aggressor, bokken aikido may be just the discipline for you. And if you’re looking for a dojo or school that offers such training, you can visit this page to start your search.